Originally published in the May 20, 2013 edition of Law Week Colorado.

The Senate “Gang of Eight’s” bipartisan comprehensive immigration bill, SB 744, makes great strides in fixing our current broken immigration system, which tears families apart, hurts businesses and deters the best and the brightest from staying in America.  It also shows the price of compromise and the give and take that almost always accompanies a comprehensive solution to a complex problem.
Undocumented can finally get in line
The bill allows undocumented immigrants who entered the U.S. before December 31, 2011 to apply to become registered provisional immigrants, or RPIs, after paying fines and back taxes.  These immigrants would receive authorization to work in the U.S. and travel abroad.  According to the bill, RPIs must wait 10 years and the Department of State must certify that the current immigrant visa backlogs have cleared before they could apply to become lawful permanent residents.  After three years as legal permanent residents, they could apply to become naturalized citizens.
DREAMers, or those individuals who entered the U.S. before age 16, could apply to become lawful permanent residents after holding registered provisional immigrant status for five years, passing a background check, earning a high school diploma and pursuing higher education or military service.  DREAMers who become legal permanent residents would be eligible to apply to become naturalized citizens immediately.
New family member restrictions
The bill would speed up the processing of immigrant visas for spouses and children of lawful permanent residents by reclassifying them as “immediate relatives.”  The existing system keeps these families apart for two or more years.  The bill would also allow immediate relatives to bring derivative family members and would bring back the V visa to allow certain family members to stay together while waiting for the processing of immigrant visas.
On the other hand, the bill also contains provisions restricting family-based categories including the elimination of the fourth preference category for brothers and sisters of adult U.S. citizens.  It also limits U.S. citizens from sponsoring their married sons and daughters over age 31.
Merit-based system replaces lottery
The bill replaces the diversity visa lottery, which awards immigrant visas to individuals from countries with low rates of immigration to the U.S., with a new two-track merit-based system for permanent residency.  The first track awards points to applicants for factors such as education, length of employment, type of employment, family members in the U.S. and length of residence.  The second track establishes a process to eliminate the backlog of pending family-based and employment-based immigrant visas and also provides a way for people in registered provisional status to eventually become lawful permanent residents.
Employment-based system changes
The bill creates a new temporary W visa for less-skilled workers in order to stem the future flow of undocumented immigration, an important piece that was not included the last time comprehensive immigration reform was passed in 1986.  The program starts with a 20,000 annual cap that can rise up to 200,000, depending on a formula and recommendations of a new federal bureau.  Although the cap may not be sufficient in early years, it is the product of compromise between industry and labor unions.  The bill also provides some relief to the agriculture industry by creating a new temporary agricultural worker program to replace the antiquated H-2A program and allowing certain undocumented agricultural workers to stay in the U.S. with a new “blue card.”
For H-1B professional workers, the bill increases the annual cap to a floor of 110,000 and a ceiling of 180,000, allows spouses to work and gives terminated employees a grace period.  At the same time, the bill imposes new recruitment and wage requirements that are unnecessary and will result in immigrants being paid more than their U.S. citizen coworkers.  There is also a restriction against the outplacement of workers, which ignores the way our economy works in many sectors.
A long needed measure for entrepreneurs is included in the bill, which creates a temporary X visa and a new category for permanent residency for immigrants investing in businesses, creating jobs and generating revenue.
The bill exempts the following permanent residency categories from annual numerical limits: employment-based first preference immigrants, doctoral degree holders, physicians who completed foreign residency requirements and employment-based derivative family members.
Additionally, the bill requires all employers to use E-Verify within five years and increases the penalties for employer noncompliance.
The time is now
As is often the case with political compromise, the Senate bill does not solve everything.  But it provides a path for the undocumented, increases immigrant visa numbers, eliminates the backlog, creates more employment visa categories and allows young DREAMers to go to college.  The public overwhelmingly supports immigration reform and lawmakers from both sides should keep the momentum going to pass a good bipartisan bill in 2013.
-Maya Wilbourn is a senior associate attorney with Stern & Curray.  She can be reached at 303-407-4100. 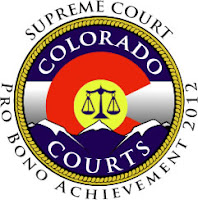 bono service in the previous year.  Our attorneys each provided at least 50 hours of pro bono time to those in need of legal services.