While conversations in the office may mostly be around immigration, we also know how to take a break to celebrate wins.  And even though Charlotte supports the “other” team, we’re doing our best not to hold it against her. 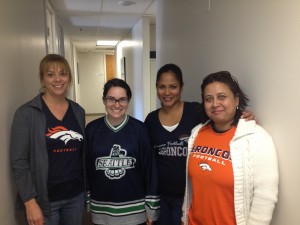 U.S. immigration policy, especially the quota on H-1B visas, is preventing IT, biotechnology, and engineering companies from hiring the best and brightest professionals even in the face of increasing shortages of qualified workers in the science, technology, engineering, and math (STEM) fields.  According to reports from many sources, there are an ever increasing number of new STEM jobs being created in the U.S. and the competition to fill these jobs is fierce.  Many companies, particularly in the software and mining industries, are having an increasingly difficult time filling open STEM positions.

Nissa Szabo, Industry Affairs Manager of the Colorado Technology Association is well aware of this problem, “In Denver the unemployment rate in the IT and high tech sectors is less than 1%. A lack of available talent poses a major challenge to our members in terms of growing their businesses.”

Many of the news reports on this subject do not make the connection between the critical shortages in STEM positions and U.S. immigration policy.  It is estimated that approximately 50% of individuals pursuing advanced degrees at American universities are foreign students.  Accordingly, half of the available talent being turned out by U.S. educational institutions will need work authorization, usually H-1B visas, to fill open STEM positions.  Unfortunately, U.S. immigration law only allows for 85,000 H-1B visas each year.  During recessionary times, these 85,000 visas would last for six to eight months of a given fiscal year.  Last year, by contrast, on the first week that H-1B visas were available USCIS received almost twice the number of applicants as available visas, and, therefore, established a computerized lottery for determining which applications would receive increasingly valuable H-1B “numbers.”  As a result, approximately half of the applicants who qualified for H-1B status were turned away and many of these deserving candidates had no other option for obtaining work authorization. Given the continuing economic recovery, it is quite possible that USCIS could receive a higher number of petitions when it starts accepting new H-1B applications on April 1, 2014 for the next fiscal year.

As immigration lawyers, we therefore must advise our corporate clients that, notwithstanding the fact that they have engaged in a long and expensive recruitment effort and have found the perfect candidate,  they will have a 50% chance, or less of actually being able to employ their candidate in H-1B status.  In many cases, the individual has already started working for the company as part of their student visa practical training and are already making sizeable contributions.  Should the employer lose the H-1B lottery, it will need to terminate the productive employee. Some commentators describe the U.S. employment-based immigration system as the last bastion of Soviet-style economic planning where the government tells companies who they can and cannot hire.

Unfortunately, the push for comprehensive immigration reform has stalled (hopefully not died) in the U.S. House of Representatives. The bill passed by the Senate, if it became law, would almost double the number of H-1B visas available to American employers. In addition, the bill provides that H-1B numbers could be increased further based on changing economic conditions. The Senate bill also includes provisions to protect against the abusive or fraudulent use of H-1B visas. These provisions represent a reasonable compromise between many different stakeholders and would make great strides in addressing the problems described in this article. Ms. Szabo of CTA agrees: “comprehensive immigration reform would be a major piece in solving the talent dilemma facing CTA’s members.”

At this critical point in time, it is important for attorneys to urge their corporate clients to “weigh in” on this important issue so that comprehensive immigration reform can move forward, more H-1B visas can be made available, and U.S. companies can have the freedom to select and employ the professionals of their choice.

This article by Senior Partner, Ken Stern,  was originally published on January 6, 2014 in Vol. 12,  No.1 of Law Week Colorado.

After the devastating typhoon that hit the Philippines on November 8th of last year, the American Immigration Lawyers Association (AILA) pressed U.S. Citizenship and Immigration Services (USCIS) to consider granting Temporary Protected Status (TPS) to impacted Filipinos. In a letter responding to that request, Director Alejandro Mayorkas states that USCIS will “continue to monitor the situation in the Philippines,” but makes no suggestion that TPS will be granted to nationals of the Philippines.  The Director encourages those impacted by the typhoon to utilize other forms of relief, such as those outlined on the USCIS website. These options include expedited processing of some petitions and extensions of certain grants of parole.